The Crescent Moon: The Asian Face of Islam in New Zealand 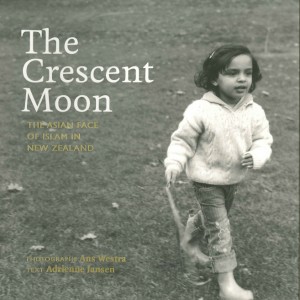 The Crescent Moon: The Asian Face of Islam in New Zealand opens new doors into the lives of the largest group of Muslims in New Zealand, and in the world as a whole: Muslims of Asian descent. A writer and a photographer take a trip through the country, catching up with people in their everyday lives – lawyers,  farmers, computer trainers, butchers, fourth-generation New Zealanders and new migrants.

They are a very diverse group, ethnically, culturally, and theologically. They talk frankly about the media, about 9/11, about identity, about faith, and offer all kinds of insights – but mostly they just talk about who they are and their life in New Zealand today.

‘Jansen and Westra have attempted to demolish the walls that surround us. They have adopted an admirably uncluttered approach, using the subjects’ own words accompanied by Westra’s powerful images to convey the emotional impact of what it is to be a Muslim in 21st century New Zealand. While  issues of faith, politics and discrimination are not avoided, there’s also a quiet wry humour and  … tolerance among many of the men and women.’ The Press

‘While this book achieves its objective of broadening the reader’s mind, changing that mind may be a different matter. It’s a good one to leave strategically placed somewhere to observe what kind of reactions it generates.’ Taranaki Daily News

The Crescent Moon is also a photographic exhibition which has been shown in a number of venues in New Zealand and Asia.

Reviews and Media
The Crescent Moon

The Crescent Moon in Kuala Lumpur

The Crescent Moon exhibition in Jakarta