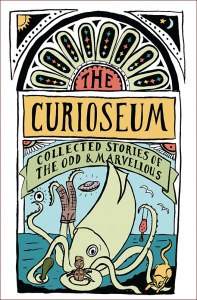 All the stories and poems in this book started out as objects in Te Papa collections. A lot of the objects were weird old things, stashed away in drawers and boxes behind the scenes.

A group of great New Zealand writers came and looked in the drawers and boxes. They chose objects, they imagined new and wonderful stories about them, then they wrote the stories. An old Victorian folded-away dress became a folded-away boy, a strange greenstone box became a gift for a galactic visitor, a dinosaur toe-bone turned into a story about a word-eating saurus!

The writers wrote stories and poems of all sorts – funny, puzzling, creepy, traditional, smart. That’s because the writers are all sorts themselves – scriptwriters, film makers, graphic novelists, poets, journalists.

And the end result is The Curioseum – a quirky original collection for 8-12 year olds.
A collaboration between Te Papa Press and the Whitireia Creative Writing Programme.

More about The Curioseum authors can be found on the Te Papa website.

Book trailer for The Curioseum

Reviews and Media
The Curioseum

Booknotes Unbound  Q & A on The Curioseum